Hailing from the deepest depths of West Wales, Hullabaloo is formed of three musicians whose sole mission is to accurately recreate the incredible music and live performances of the legendary band MUSE.
Traveling up and down the UK and beyond headlining prestigious venues such as Bristol’s The Fleece and Oakwood Theme Park’s After Dark Festival, Hullabaloo have truly made a name for themselves on the Tribute scene. Their repertoire covers an impressive breadth of hits specially selected from MUSE’s number 1 selling albums; from ‘Showbiz’ through to ‘Simulation Theory’, even including some of the more obscure B-sides and spur of the moment live jams that only the most loyal fans will recognise. Not only have Hullabaloo captured the incredibly demanding
signature sound of MUSE, but they also look the part performing in their stylised costumes beneath an onslaught of mesmerising visuals. Their passionate performances are bound to leave you wondering: Is this really a tribute or could it actually be the real deal? There’s only one way to find out …come join the resistance and experience it for yourself.

‘The Fleetwood Mac Songbook’ is made up of six experienced musicians who are dedicated to celebrating one of the all time great Rock, Pop & Blues bands in the World – FLEETWOOD
MAC.
The band deliver faithful live recreations of all of the Mac’s best known and well loved songs. They span the 50+ years right from the Peter Green Blues era through their multi million
selling West Coast Rock ‘Rumours’ incarnation (after the addition of Lindsey Buckingham and Stevie Nicks to the line-up), onto the hitpacked, glossy 80s production, ‘Tango In The
Night’ plus the triumphant resurgence brought about by 1997’s live comback, ‘The Dance’.
Expect to hear classic tracks including – ‘Go Your Own Way’, ‘Little Lies’, ‘Dreams’, ‘Seven Wonders’, ‘Everywhere’, ‘The Chain (the Formula One theme song !)’, ‘Rhiannon’, ‘Oh Well’ plus so many other of their timeless songs that have been loved for decades. The music is enhanced by the use of authentic instruments as used by Fleetwood Mac themselves, a stellar lightshow with projections
and replica costumes so it isn’t only good to listen to but great to look at too. Join us on Facebook and sign up to our mailing list to make sure that you don’t miss any news about upcoming shows and get ready for a night to remember with ‘The Fleetwood Mac Songbook’.Never Break The Chain ! – Stevie Nicks, The Chain, 1977
www.thefleetwoodmacsongbook.com 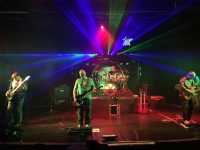 WISH WE WERE PINK FLOYD

Wish We Were Pink Floyd, deliver an evening of Pink Floyd music spanning the best- selling band’s whole career from 60s psychedelia to their final album in 2014.
The power of Pink Floyd’s iconic songs and sounds are delivered with a stunning laser light show and professional quality sound played by five musicians with a love for the music and a life time of experience to deliver.
The line-up comprises: Bill Gale: Drums/vocals, Franz Hanswenzl: Bass/vocals, Cliff Stopforth: Keyboards, Gareth Turner: Guitar/Vocals, Steve Williams: Guitar/Vocals

Scroll back to top